Need help for upgrading my battery for electric trolling

Hi, I would love to get some help because my goal is to upgrade the Aqua marina bluedrive powerfin's electric motor battery to a bigger one and i don´t have enough electrical knowledge for this.


I know There are ready-made larger batteries with cases, but they are really expensive and my budget is not enough for them at the moment, the battery itself and the case are about 260 euros at their cheapest price at the moment, but when the only suppliers are in China and the United States, the taxes will be about 70-80 euros and 150- 200 euros plus delivery costs and thus the price will be at least a salty 480 euros and the delivery time is from three weeks on wards,

So the aim would be to use parts of the old smaller battery such as this special four-pin connector and a circuit board with a magnetic emergency brake mechanism, i would would like to keep this function with a new battery because the motor is part of the kayak, but if that is not possible, the circuit breaker is also sufficient,

the current battery is only an 8 AH li-ion battery that lasts for 60 minutes in the lowest gear and 30 minutes in the highest gear, which is consumed in an instant when it is windy or just current flowing against desired way, the goal would be to get power for 2.5-5 hours and the budget is around 300-400 euros, so at least 50 AH should be found, but 120 AH would be best so that there would be enough power to charge the phone, so the purpose would be to buy a portable/rolling solar panel in the future that i can take with me, then I could go camping longer trips in the archipelago with out returning every time for starting point, I uploaded a lot of pictures of the circuit board and the battery, which can be accessed via the link for google photos.

I would need help from the experts on what is the third wire between the circuit board and the battery in addition to the negative and positive wire, is this wire related to the fact that the whole has a WIFI remote control to start the engine or change gears, the port in circuit board is called BAT-SW and in another forum guy told me it is some kind of solenoid switch.

Then the question that if I order a battery with the same voltage, i.e. 12v, will the larger AH amount of the battery somehow affect the circuit board, my common sense says no, but I would like to make sure of this before I order.

I know connecting 8AH and 100AH capacity lithium in parallel is not a good idea as because overcharge/discharge what can harm the battery, but if there is easy way to do this using existing components on that battery box in pictures as cheapest way possible to get that desired 100 -120 AH capacity i would like to hear it, so far if thought maybe some kind of low energy BMS can be purchased and added to the old battery box machinery between that circuit board and battery wiring, i have no expertise to seek one, as i don´t know can the bigger battery capacity do harm to the circuit board even the voltage stays same nor i do have any keywords to learn and seek information or parts, another solution is that i could transfer the solenoid to the new bigger battery but i don't know do the bigger battery capacity burn this solenoid even the voltage stays same, maybe the are resistances of some kind? idk 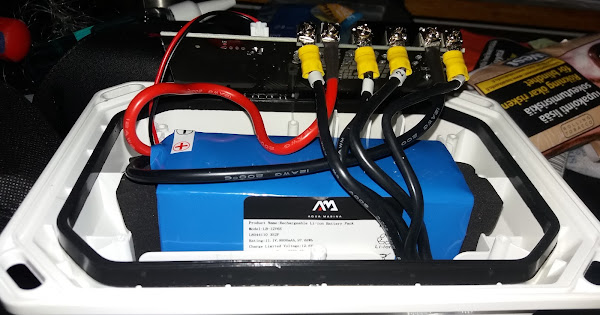 photos.app.goo.gl
Last edited: Aug 3, 2022
You must log in or register to reply here.