Today I was looking for PT2399 prices and I was not sure to go Chinese cheap IC market or buying local since I needed 3 of them for decent delay and local prices were too high but I didn't wanted to risk getting fakes from China. After my fruitless pursuit for ICs I was at my favourite electronic shop looking for other stuff and I told the seller that I found the PT2399 but I ended up not buying because it was bit expensive.

He told me he should have some and we checked but they were stuff similar with name like pt2249 or 53 but completely different ICs. Then I told him that it was for making delay and he said he had something like MN3008 at some where if that would do the job for me. I checked and saw that it was an analog delay chip and it was indeed used before for modular synth purposes. There were only two left because they were there for god knows how long. Apparently there were people getting in que to get one in the past. There were no MN3005 unfortunately. Anyway it looks like these were discontinued and they were sought after by DIY enthusiast. Anyone got some solid schematics for a delay module using two of these to get longer delay. I read that you need a clock and inverse of that clock. I got some inverter ICs like 4069, 40106 that I can use for getting that type of clock signal.

I am aware that PT2399 is a digital delay module and this one is analog so they will need completely different circuits in order to operate. Because MN3008 has half the stage count of MN3005 I want to use two chips I got in series to create a longer delay. 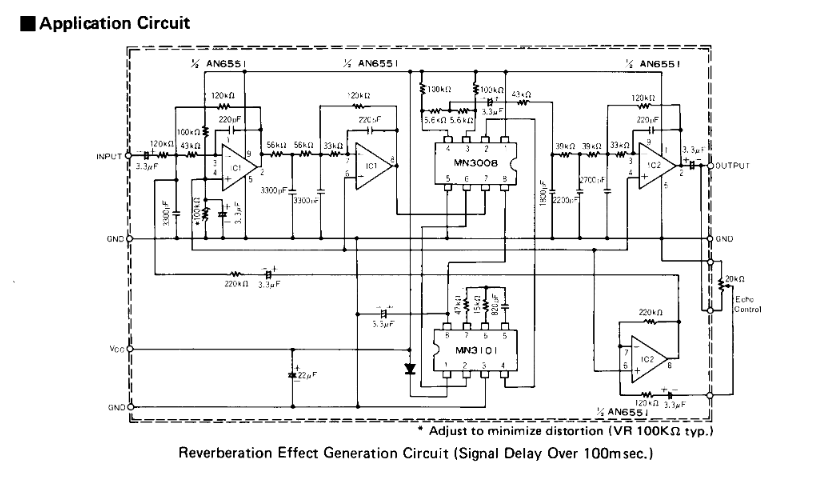 One main problem is that chip requires -15V. My power supply can give +/-12V. But it actually has something around +/-16.5V lowered to 12V with linear converters to get rid of ripple. So If I get 15V and -15V linear converters I can convert it to an +/-15V power supply. I am not sure those linear converters can operate with 1.5V headroom but I can also get a transformer with higher voltage out. But this would mean quite a lot of expenses and I don't want to mess up my other circuits working with 12V. Instead of that can I get the 16.5V DC and use a simple resistor divider or just directly feed it to the chip since its max operating voltage is -18V. I still have 14100uF filtering caps on both rails and load is rather low so I don't think it would suffer from voltage supply ripple. I can also add non electrolitic caps for uncoupling for being sure.
Voltage problem aside the MN3101 needs to be replaced. I found this in here: 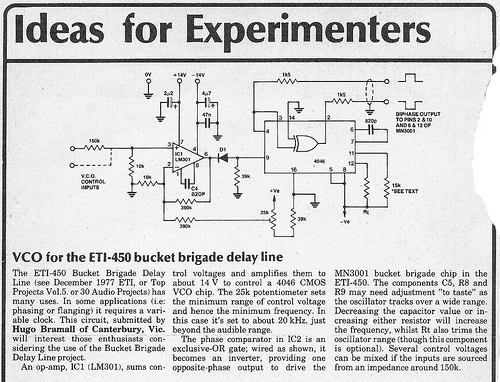 It seems MN3008 needs a clock signal and same signals inverted version. I have CD40106 I used before for an oscillator and it looks like a good replacement since I can also invert the signal in the same chip. It would be sad to leave all other 4 not gates unused though. Looks like CD4047 is often used.
Also: "-A LFO for modulating the delay clock. This also requires some sort of circuit that allows the slowly varying voltage from the LFO to influence the timing of the delay clock. Once this is in place, the effect can go from being "just a delay" to also having flange/chorus/vibrato ability." I have an voltage controlled LFO. If I can use a VCO for the clock like CD4046 can I achieve those effects. Can I use an existing VCO based around CD40106 and just invert the output for clock. If I can I may just build a board to connect to me triple VCO (it even has 3 unused gates of the CD40106) and it would be awesome.

Edit: It turns out my transformer gives 17.5V out after rectification without load. I will need atleast a resistor divider. Or I can just try 12V and see if it works. Some folk said it worked for him. Does this thing only need negative supply? It may be more logical to get a -15V linear converter then. I wish buck converters didn't had the high frequency noise. They are terrible for audio use.
Last edited: Sep 16, 2022
Sort by date Sort by votes

This may not be important to you now, but when I saw capacitor C2 going from the inverting input of op amp U3.1 to GND, it raised a red flag. This capacitor causes a huge peak in the gain of the amp at around 3kHz - just the opposite of what you want. Put a cap across R2 if you want to filter input noise. 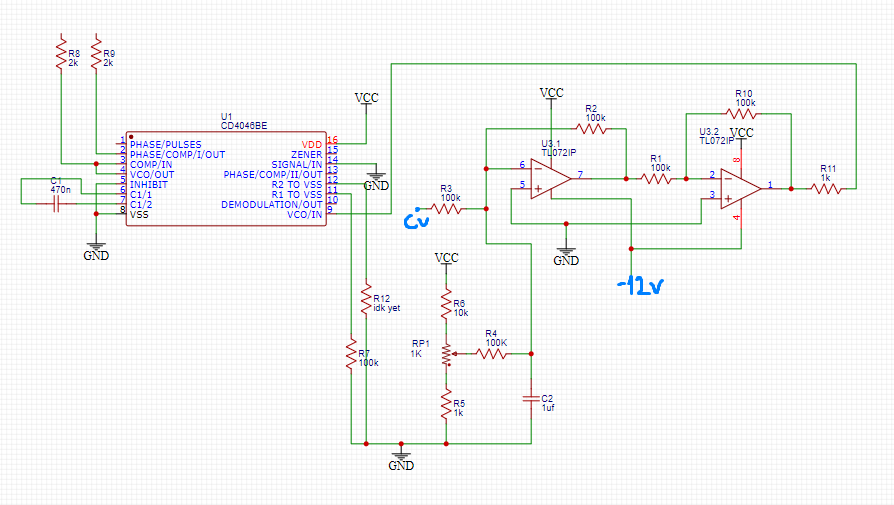 Roff said:
This may not be important to you now, but when I saw capacitor C2 going from the inverting input of op amp U3.1 to GND, it raised a red flag. This capacitor causes a huge peak in the gain of the amp at around 3kHz - just the opposite of what you want. Put a cap across R2 if you want to filter input noise.View attachment 139399
Click to expand...

Didn't know a decoupling capacitor to stabilize the voltage divider output could effect frequency response like that. Wouldn't putting a capacitor across R2 decrease high frequency gain. In this case it makes sense since it is only used to add voltages and we don't want high freq ac. If I put C2 across the RP1 to ground instead of R4 to ground I think it would also fix the issue.
Upvote 0 Downvote
You must log in or register to reply here.