Hello everyone, I'm new to this forum so if I post in the wrong place or I make any mistakes, pls tell me!

As the title suggests, I'm new to PIC microcontrollers
So I just bought a PIC 12F629 but the I realised that I don't have any programmer for PICs

so do any of you guys know any kind of programmer that I could build that supports that PIC and uses parallel port/com? (I can't build a ICD1/2/3 nor PICKIT2 since it's too difficult for me!)

btw, my PC is a desktop, if that somehow matters.

Hi 32bit, There are circuits to build out there , but the last thing you want is questions about the programmer ( not finding chip , etc ) , starting out with PIC ...have you considered MPLAB xpress dev board, all you need to start. currently at $10 a pop....
edit
http://www.microchip.com/mplab/mplab-xpress
Not sure the cloud based setup would be good ? But it does say it will work with MPLABX ?
Last edited: Aug 19, 2016

Most Helpful Member
Look here.
http://www.electronicecircuits.com/electronic-software/winpic-pic-programmer-software-download
Eric " Good enough is Perfect ", good enough means it meets the Clients specification.!
Please do NOT PM me with technical questions, use the Forums
http://www.winpicprog.co.uk
L

Most Helpful Member
Hi 32bit,
Here is a web page with one program to program PICs. The serial port JDM programmer is probably the simplest to build bit it only works on serial ports that have a signal level swing ov at least +12 & -12 volts. This is because it generates the programming voltage from the RS232 signals. There are many parallel port programmer designs to be found on the web. I have not used this type for many years as I now use a PICKIT2 and 3. You can buy PICKIT2s on ebay. (To build a PICKIT2 clone yourself you need a programmer to program the PIC used in it.) Giving some idea of your location in your profile is helpful to know how easy it is for you to buy parts etc. Never post your full address or email adress on a forum.)

Does the COM84 programmer support my PIC12F629? I built one but it doesn't work!
W

If you want to spend hours going around in circles, lots of unexplained errors , software and hardware problems, then just carry on doing what you are doing .

How do we know, because in the early micro days they were the kind of things we had to contend with before the Pickits came out at a sensible price.

You can buy a clone pickit2 or pickit3 for a lot less than what you will spend try out those old serial and parallel programmers.
You could build your own pickit2, but it needs a pre programmed chip and the cost of the parts is typically greater than an ebay clone.

Alternatives, buy an Arduino Uno , again either genuine or a £5 clone , which uses a usb bootloader to so need for a separate programmer during development.

Hi again You need to get coding not messing with a programmer , also when starting out, de-bug IMO is essential what is your budget ?

I have a pickit 2 clone already (AND I DON'T WANT TO WASTE MONEY ON A PIC18 FOR MAKING A PICKIT2!), it doesn't support HVP (it's 5v only), which pic12f629 requires, I already own 2 arduinos, 1 uno and one due. I already worked with AVR, 8051, ARM and I just wanted to try out PIC so I decided to buy the pic12f629, since it's cheap. So if I buy another programmer than that'd be a waste of money since I could build one at home. The ONLY thing that I expect from that programmer that I will make is it could program my pic. That's all what I need. No debugging capabilities. I just need it to program my PIC. I also have a pic16f54, if that somehow helps. Btw, could anybody post a simplified version of the ICD2? Because I have a PIC16F887 lying around (the reason why I don't use PIC16f887 in my project is because it's too big and complex) and my budget is 2.50$ max and I have lots of parts lying around.
Last edited: Aug 19, 2016
W

A typical pk2 clone does support HVP, that is the 'standard' way to program many Pics.

Please give links /circuit diagram etv of it so we can see exactly what your Pk2 is, as it should provide you with everything you need.

I'm sorry, I bought it quite long ago, the seller's website is now defunct, I don't have the schematic. And it says "5V ONLY" and I tried with a pic12f629 and it doesn't work. And do you have a simplified version of the ICD1/2? That'd help me ALOT
W

I honestly cannot believe a commercially sold Pk2 is not capable of HVP, I suspect the reference to 5V only means its powered by or can only program chips that normally run on 5V; that is separate to the 12v HVP it generates internally from its 5v supply.

If you have a photo of it, that might help; so we could see the connectors it has . I think we could give you the correct connection diagram to prove it works ok, and so end all your problems.

There have been a lot of Icd2 plans over the years but not my diyers go to the trouble of building them; as the Pk2 was so much easier to build.
W

Here are the connection details of the Pk2 and how its connected to a typical target chip.

Most Helpful Member
The official PICkit 2 can vary Vdd to the target chip to support programming 3v-only parts. Many of the clones don't support this feature, hence the "5 volts only" label. In the GUI, it will appear that you can change Vdd, but it won't actually change. This isn't a problem unless you're trying to program a 3v-only chip.

Just like the official PICkit 2, the clones will generate the necessary ~12v programming voltage.

Using the PICkit 2 clone is by far the best option for programming the chip you want to use.

Search JDM programmer here and you'll see many people who have spend months trying to make the things work with today's computers without success.
W

Forgot to say, you can find the Pickit Application program V2.61 and the Firmware v 2.32 at the very bottom of this page.
http://www.microchip.com/development-tools/downloads-archive
L

Most Helpful Member
Hi 32bit,
I think the COM84 programmer should work with a PIC12F629 providing you are using software capable of programming the PIC12F629 AND with a serial port with at least a - 12V to +12 volts swing as it is basically a JDM programmer.

Les Jones said:
Hi 32bit,
I think the COM84 programmer should work with a PIC12F629 providing you are using software capable of programming the PIC12F629 AND with a serial port with at least a - 12V to +12 volts swing as it is basically a JDM programmer.

Yes, it should work....if....and if....and if....and if.... There are dozens of forum threads here talking about trying to make these things work. If there is a serial port on a computer these days, it's usually not fully compliant with the RS-232 spec and won't work. There's a (mythical?) belief that JDM programmers work with some USB serial adapters, and people have spent months and $$$ searching for this Holy Grail of USB adapters without success. Seriously, read some of the forum threads on JDM programmers here. If you want to program micros, use a PICkit - otherwise your time will be wasted trying to make an obsolete programmer work.

JonSea said:
otherwise your time will be wasted trying to make an obsolete programmer work.
Click to expand...

I once spent a day doing just that...
...and then bought a PicKit2 and never looked back.

Sometimes the cheap option is not cheap, because you spend more time and money trying to get the thing to work.

I'm definitely with those that say to just use your PicKit 2, or buy a new one if it's truly broken. There's enough to question with making a circuit and firmware without your programmer/debugger being in question.

My only other tip is that if you are unsure of the connections check the data sheet, I've linked to it above, Page 4 of the PDF. I'm not sure how new you are so I don't know if this is obvious. 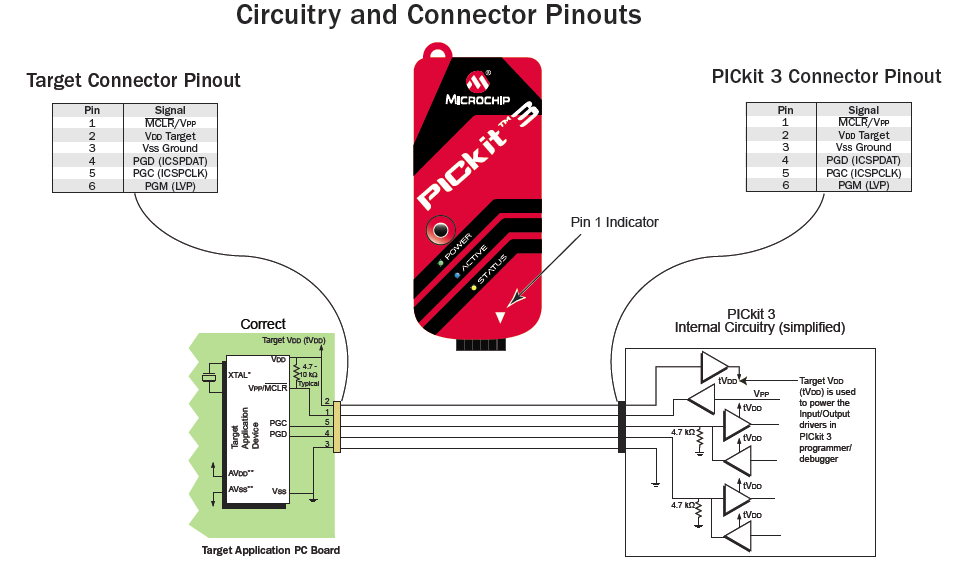 J
Possible to use my own programmer for PIC's? (I'm new to this stuf)