Most Helpful Member
Welcome ETO!
You had answers to this question over at AAC.
My circuit designs should be regarded as experimental. Although they work in simulation, their component values may need altering or additional components may be necessary when the circuits are built. Due safety precautions should be taken with any circuit involving mains voltage or electrostatic-sensitive components.
Alec's First Law:-
Every problem has a solution (given the right information and resources).
C

HDD has SMART technology is it an indication that it automatically remaps and isolates bad sectors (badblocks)?

SMART is just a report?
V

classicjohn said:
SMART is just a report?
Click to expand...

Yes, while SMART was originally just a report, it has gone thru changes where it could attempt to repair/isolate bad sectors by means of operating software---there is no "function" within the HD.
It is the Operating system &/or third party software which will attempt to do the repair function whether it is soft or hard failure (/f command in DOS days).
Bottom line, if your lucky to see the report before hand, its best to copy your important files as soon as possible for the imminent failure.
You never know how long that might be? I have seen HD's with bad sectors that seem to work for a long time or may fail shortly.
C

It is the firmware that detects CRC errors and other issues like timing, recalibration of the heads, etc. Windows does not do that. It is firmware that re-maps the spare sectors, as Windows does not know where they are or how many there are left.
SMART does report these things to Windows, and in a few cases, WIndows may attemnpt a re-read or write of a sector, but it does not know if the firmware in the drive does it on the same sector, or a replacement sector.
All the low level disk functions are done by the firmware. Higher level things like reporting are in Windows. A CHKDSK is window's attempt to read/write all sectors to "test" the drive. If it finds a sector that cannot be repaired or reallocated by firmware, then it marks the sector bad in the Windows directory/disk map structures. By then, the disk is failing, there would be no new spare sectors for the firmware to use.
Last edited: Oct 12, 2020
C

HDDs of the year 2000 have this automatic function in the firmware to reallocate and isolate defective sectors (bad blocks) of the HDD? I searched and didn't find much information because this function has no name

It is not so much which year, but which technology those drives had. For earlier IDE drives, there was very little, if any, SMART technology. Many drives simply read or wrote sectors and if any bad block was hit, Windows would simply mark it as "bad". There was no firmware in many of the early IDE drives that had built in bad block replacement. SATA drives are different, they generally have more intelligent firmware.
Many early IDE drives did have however, a low level formatting capability, sometimes using a vendor's utility. That would reformat the entire disk at a low level, often clearing bad blocks. However, those fixed blocks often returned after a while. Other drives, like SCSI had a few more smarts in them, but usually the add-on disk controller handled bad blocks, still hiding it from Windows. It was neither IDE nor SATA, but SCSI that had add-on controllers, a totally different disk technology at that time.
The "2000" is rather ambiguous, there were, and still are, many different disk technologies. One would have to be more specific as to the disk make/model and what technology it actually used to be able to say if there was any "smarts" in the drive firmware. Simply stating "year 2000" is not a clear definition.
Downloading files cannot be saved to a bad block. Either the download fails, with some errors with Windows detecting a write failure, or the drive re-maps the sector behind the scenes (more modern disks). There is a very remote chance that a download is written successfully, but a read thereafter fails, but that would be a one-of instance. Further downloads would not use the same bad block. It would be re-mapped by newer firmware, or flagged as a bad block by Windows for older drives.
C

I used many 16GB IDE HDDs from the year 2000 from Seagate and WD, I was reading HDDS manuals from that time and the ones I saw had SMART but is this SMART installed in the firmware? is SMART that automatically reallocated and isolates defective sectors from the HDD?

If a file that I download is directed to be recorded in a bad sector, will the HDD or Windows XP, 7 and 10 recognize that bad sector and prevent the file from being recorded in that sector?

Most Helpful Member
Windows does not normally do read-after-write verification on hard drive or flash filesystems.
A write will only fail if the device reports an error to windows, otherwise it performs a blind write on the basis things work.

You can (or could) switch NTFS to read-after-write mode with the command "verify on", but that only works for the context it is used in and is not system wide or permanent.

As far as I understand it, surface wear or damage within an drive will cause an increase in the number of read faults that require ECC to correct and the drive firmware will remap sectors that show a percentage of ECC errors above a certain point.

A sector changing from reading properly to being uncorrectable in one go would be a fairly rare event, I believe - unless it was caused by physical damage such as an impact causing a head crash.
That takes a lot of force, a typical hard drive can stand over 100G without damage - from a quick look, a typical laptop drive can be rated at 300 - 400G while operating!
C

What technology does an HDD need to have the firmware automatically reallocate and isolate bad sectors?

Most Helpful Member
As far as I am aware, all "IDE" drives have that facility.

Drives without that facility, like the older MFM ones that had a separate controller board, had a "Defect list" label on them that gave the preexisting faulty sectors. IDE drives have any original faults already relocated so no user info is required. 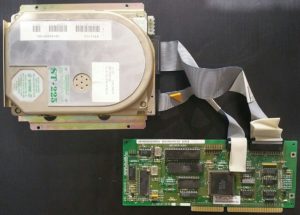 The “older” PCs that I have laying around in the workshop all tend to be Pentium II era machines or later. Unfortunately I don’t have much in the way of working 8086, 286, 386 or …
avitech.com.au

A tool like Spinrite can read and rewrite the entire disc, forcing the drive to discover any failing sectors and trigger relocation.

If the old HDD contains SMART then does it have automatic reallocated technology from defective sectors? does he only need to have SMART?

Most Helpful Member
If a drive gives a report when you use some monitoring tool to read the smart data, and that data contains a reallocated sectors count (parameter 5), then the drive presumably has automatic reallocation.

Parameters 196 and 197 relate directly to the internal reallocation / remapping functions.

[And if 198 starts to increase, get a new drive immediately].

See the reportable parameters (attributes) in detail in this article:

Most Helpful Member
Probably, but I do not know for sure,
Run a SMART display tool and look!

Try any of these: