We spoke last week about fuses on my boat, 125 amp for each battery. The starter motor draws 200 amps but only for a few seconds so these will be OK. It would seem much more sensible however, to fit circuit breakers. If in the event of a mega fuse blowing it would be a fag to change it, much easier to reset a breaker.

My question is to cope with the 200 amps of starter motor will a 100 amp or 150 amp circuit breaker be OK? I don't know at what time delay or current they actually trip?

Actually thinking about this why not a 200amp CB is this OK?

My rationale is that most breakers respond (trip) as the result of a thermal trigger. Thus, with an expected 200A draw, you'd be right on top of the trip point and for an extended period of time. This would, probably, result in annoying interruptions.

The 250A (pricey, to be sure) would better suit the application by giving you protection in the event of a true short, without the interruptions.
Semper ubi sub ubi.
T

Thanks for that how about a couple of these one for each battery.

Most Helpful Member
I couldn't determine whether the breaker listed is "marine" rated or not. In your application, I would require that.

Most Helpful Member
Maybe a dumb question, but why does a starter motor need a fuse? Like in a car the starter is unfused and all of the other accessories are fused after the starter cable. But that I mean the battery cable goes to the starter, then a wire comes from that point to the fuse block.

shortbus= said:
Maybe a dumb question, but why does a starter motor need a fuse?
Click to expand...

Probably to reduce the risk of destroy the battery in an event where the starter motor is prevented to rotate. It may have more serious consequences at sea in case where it's a need of calling for help by radio. Maybe one backup battery isn't enough for that kind of safety.
To just put one feet in front of the other to move forward was never enough

shortbus= said:
... Maybe a dumb question, but why does a starter motor need a fuse? Like in a car the starter is unfused and all of the other accessories are fused after the starter cable. But that I mean the battery cable goes to the starter, then a wire comes from that point to the fuse block.
Click to expand...

I've had starters "seize" in cars and boats, i.e., as Grossel suggested. Most well equipped marine battery wiring assemblies include, at the least, a heavy duty rotary switch to select either: A battery ON, OFF or B battery ON.

The seizures required that I remove a battery terminal cable which was an ordeal and took long enough to result in damage. Had it happened in my '01 Volvo V70, I probably would have lost the car since the battery is under a bolted down metal cover under the rear deck.
Semper ubi sub ubi.
T

Thanks for all that. Got a new one for you.

I am fitting a Blue Sea charging system to the two batteries in the boat. I would like a voltmeter for each battery to show condition of each. Will this work?

How will the batteries be wired (and used), i.e., separately (using 2 chargers) or in parallel (1 charger)?

How you monitor their voltage level depends on the above. But keep in mind that a lead acid battery's voltage level does not indicate its capacity (energy density). This is best checked with either a hydrometer or a resistive load tester. Neither of these are used as a continuous indicator - they are only for periodic testing.
Semper ubi sub ubi.
T 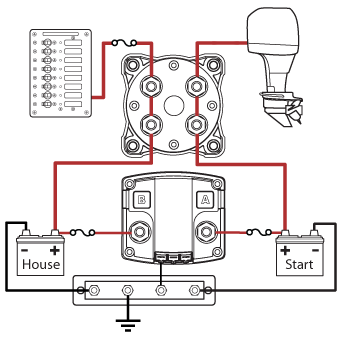 I do not have an outboard, but a 27hp diesel inboard with one 55 amp alternator. I got two volt meters because there are two batteries but where do I wire in the voltmeters to monitor battery condition simultaneously? Because, if the Blue Sea charging relay shuts off charging to one battery presumably I won't get a reading on one of the voltmeters? I a right about this or just dumb? Don't answer that last bit!

Most Helpful Member
OK. I see.

You can (if you so choose) put a separate voltmeter (VM) directly across each respective battery. From the ACR data above, though, they will not give you individual battery readings during charging (any time the engine is on), engine cranking OR when you use the Dual Circuit Plus™ Battery Switch set to the emergency starting position.

Thus, VMs will only indicate true, unloaded battery voltage when the engine if OFF. And, as I said, this is not a valid battery condition indicator.
Semper ubi sub ubi.
T

So Ignition on, I can see what the state of each battery is,............ but then when the engine is started it won't show me what I was hoping. Will both voltmeters therefore read the same as a mean across both batteries, unless of course the ACR cuts charging to one or both out?

Most Helpful Member
Not a boat guy so didn't know. And must be really lucky, in over 50 years of driving and working on cars, my own and other peoples never saw a starter or heard of a starter seizing.

Most Helpful Member
If you have the system as shown in Post #10, the two batteries serve 2 loads: 1. the starter (and engine which includes the alternator) and, 2. the boats electronics. They can be combined (in parallel) for emergency purposes.

As I understand the description of the operation of the Bluesea rig you posted, it appears the two batteries are charged simultaneously which, would, of course, puts the same voltage level on both batteries during the charging process. So, yes, separate VMs would be redundant.

However, the ACR does, apparently, isolate the 2 from each other when OFF or if one or the other needs no charge. So, in that case, 2 VMs would be indicating separate voltage levels (i.e., Charging level or normal battery level values).

However, given that I have no idea how the system might, eventually, be wired (there are other options), I'd suggest the following:

One VM and a 3 position switch wired as below:

Just check the batteries as you see fit, always returning the switch to "OFF".
Semper ubi sub ubi.
T

Thanks for that and thanks for the idea with a switch. It's clearer now for me.

Thanks for the input.
Semper ubi sub ubi.
K

Most Helpful Member
Agree. Voltmeters draw power. One of my vehicles had a voltmeter and an idiot light (not charging). I kinda liked that.

State of charge: NO. State of discharge while listening to the radio - yes.

DIP or SMD for car projects