hello gentles
I'm also working on build a Force Feedback Direct drive, so this seems to be a good forum to post especially because I need a second opinion about my crazy idea.
So far the main thing to build a project like this is the driver for the stepper motor. I already found some drivers like the Argon driver with some auxiliary components which is able to control the stepper with the PWM sent by the DISCOVERY board (but the cost for this is way more then I want to spend, and close to commercial steering wheels).
Considering this cost (around 700 dollars only for the driver), I started to think in a cheaper solution to the masses, but before executing this plan I would like a second opinion out it.

first two basic facts
1 - commercial steering wheels are based on torque control, so it can give a hight torque for strong effects and lower torque for the weak ones.
2 - to control the torque of an electrical motor we need to control the current, in this case in the coils of the stepper motor.
Following this thinking, I made a lot of research and I found that the most of the "Chinese cheap drivers" have current control by chopping the current. The problem then was that the mode of we set this current control is mostly through switches, so we couldn't control it by Arduino(I choose Arduino because I couldn't find the code to modify the firmware of the discovery force feedback, just the .hex file to burn on it.)
Searching a bit more about chopper stepper drivers I found some circuits DIY based on the chip Toshiba tb6600, which can drive steppers using 10 to 42VDC up to 4.5A, and the mode of control of this circuit is via 10K pot, so the plan is to use one of this driver ( I found for 10 aud from China), and replace this pot by a X9C103 Digital potentiometer, so we can control it via Arduino

PS: As the intention is to build the steering wheel not the driver I'll jump this part and buy one of this,(if someone is interested just let me know that I can share the project of this driver and some more information that I found about Chinese drivers, because I am convicted that we can use this "mod" in any driver) 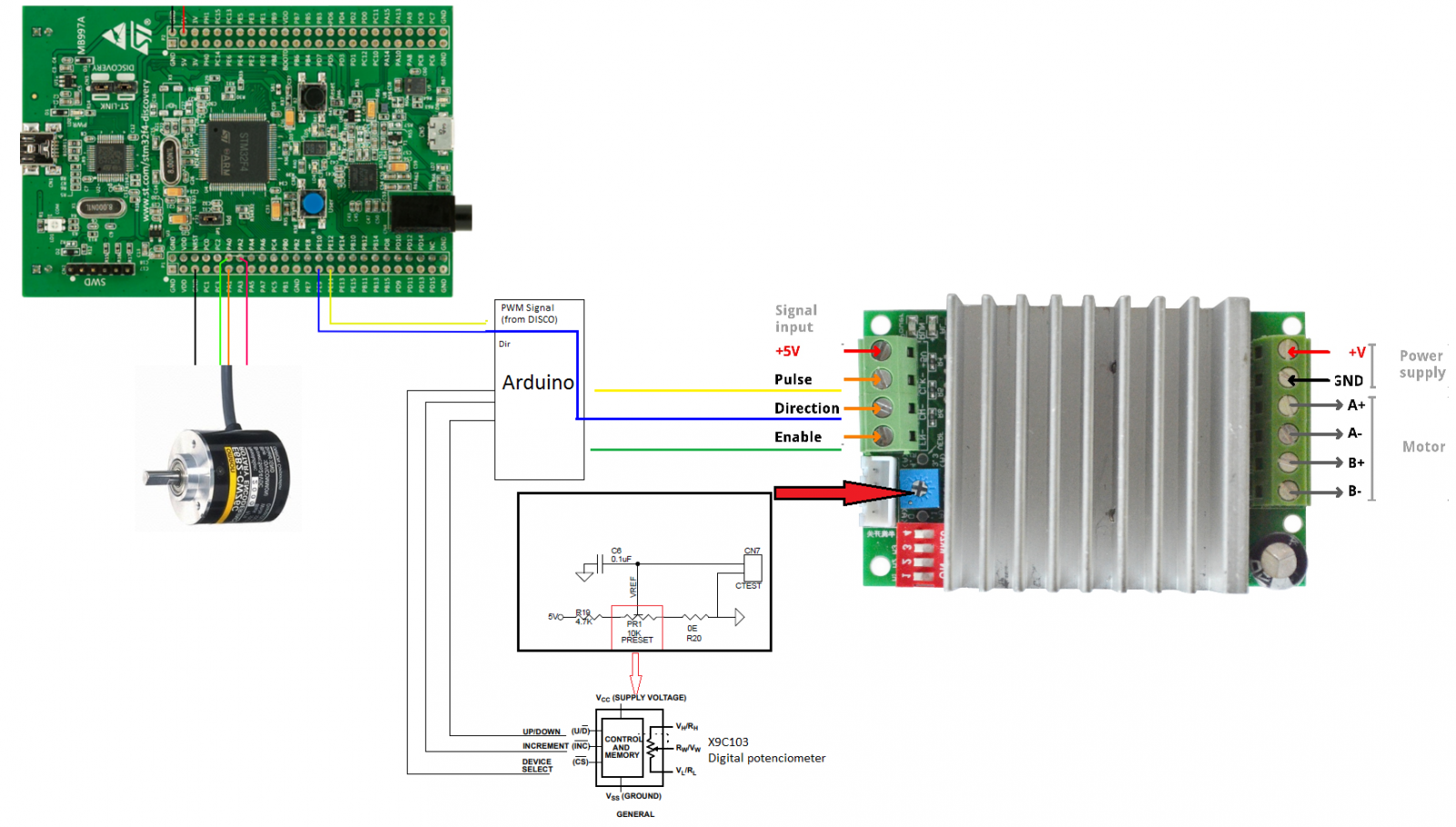 I will copy the main idea of another forum that uses an Arduino to convert the PWM coming from the DISCOVERY board into a percentage of torque( or percentage of Amps applied to the coils), controlling this way the torque.

The direction signal I will use to set direction and a constant speed, sending pulses to the driver ( I'm not sure about using a constant speed, but it looks like this is the way the commercial FFB wheels work, constant speed and variable torque depending on the effect)
I would like to listen to a second opinion about this crazy plan before start buying stuff. Do you guys think this would work? any suggestion about the circuit or the mode of control?

Welcome to ETO!
Are you talking about building the kind of steering wheel used for video gaming (or similar)?

I think you might do better with a brushed DC motor, rather than a stepper, if you're interested in providing a smooth torque. A stepper wants to run synchronously, and it's torque drops once it's broken away from it's synchronous speed - which will give the wheel rather a stick-slip feeling, I think.

The principle is the same though - controlling the current controls the torque. I'm not saying that you couldn't do it with a stepper, but do I think a DC motor might be easier.
"Don't Fear the Repair."

Most Helpful Member
If you just need to create a variable amount of torque drag in a rotary motion that's not too hard to do with simple components.

Try dropping a neodymium magnet through a copper pipe of slightly larger diameter and you will see what I am talking about.

To use that effect all you need is a rotor that fits inside a solid copper ring and a way to change the rotors magnetic field strength. The rest is just the dimensions and electrical inputs you need to produce the desired maximum torque drag you want at whatever speed of rotation you will see.
"What can you do to communicate better? If you think being a proud smug snarky know it all fool is it, you have already ruined the constructive aspects of the conversation and your credibility before anything ever got moving." tcmtech.

Most Helpful Member
I assume you actually need the wheel to be able to move against the driver so a simple variable friction brake won't work?

dknguyen said:
I assume you actually need the wheel to be able to move against the driver so a simple variable friction brake won't work?
Click to expand...

I'd say that is correct, otherwise something like an AC compressor magnetic clutch could possibly do the job.

I have a force-feedback joystick, which is in my to-do pile of stuff that needs looking at, but waaaaay down the list. The PSU isn't working and a cursory glance showed nothing untoward like vented electrolytics, PCB corrosion, or a blown fuse. The cursory glance did however show 2 x 24V DC motors, each being connected to the joystick gimbal via a gear-train, and a H-bridge for each motor on the PCB. AFAIK, the motors not only provide resistance under certain conditions, but also counter-torque.

If you have ever been in a vehicle spinning out of control, as in what kids end up doing when on empty car parks practicing handbrake turns and j-turns , you would find that at some point, it feels like someone is trying to wrench the steering wheel in the opposite direction you intend. That's what the force-feedback controller is trying to replicate, in addition to resistance to your movements.
Insert a quote or something funny here.....