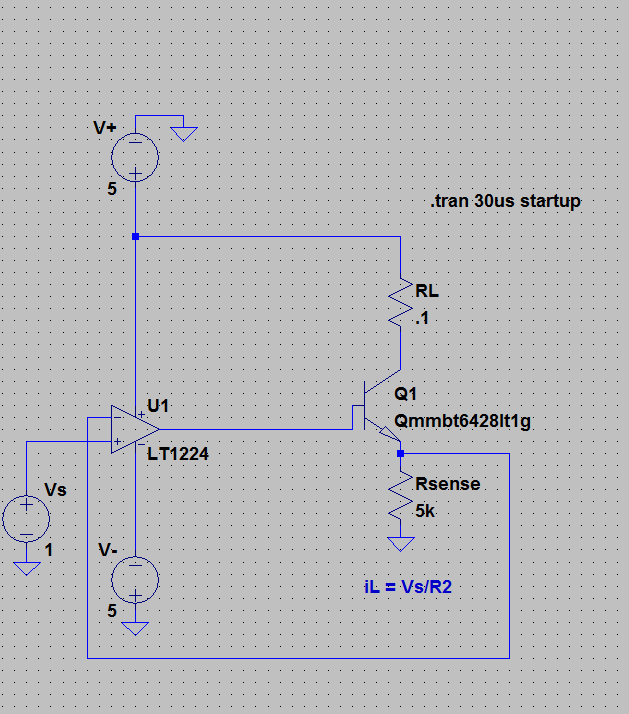 This circuit is a basic current source, with the current through RL = Vs/Rsense. With a circuit like this, for purposes of choosing the op-amp properly, what would the gain be? Some opamps are optimized for unity gain, some for gains > 5 or > 10. With a voltage-in, voltage-out circuit it's easy, but what does "gain" mean in this case, which is basically a trans-impedence application? Turns out that it needs an op-amp that can handle unity-gain; one optimized for gains > 5 oscillate like crazy, but I have no idea why.
S

Most Helpful Member
The opamp should be unity gain stable for that configuration. Because an emitter follower has a gain of approximately one it has no effect on the loop voltage response.

Of course this is a gross simplification because an emitter follower also has a frequency response so you have to be extra careful that with the 90 degree lag of the opamp, you don't end up adding another 90 Deg lag at the frequency where the open-loop and closed loop-lines cross.

spec
Is anything true?
M

This kind of circuit can be deceiving. The op amp output is like a voltage source and it is driving the base emitter diode which because of diode voltage to current response and added transistor action produces a relatively high current for a very small change in base emitter voltage which then produces an output voltage across a relatively high impedance of 5k Ohms. So we go from tiny voltage to large current and then back to voltage which might be large until the op amp can detect that the output is too high, which of course takes time, and after it detects that it cuts back and then it needs time for it to detect the lower voltage.
The op amp itself has to be unity gain stable because the overall gain is 1 just as in a circuit that would regulate the voltage across the 5k resistor.

To give a quick example, say the op amp output has to change by 0.010 volts and it does so, this could cause some milliamps increase through the transistor base, but with a base resistor of only 10 ohms that same 10mv only can cause at most 1ma increase and if more than that is needed the output of the op amp has to increase more, and that means a smoother transition from one level to the next.

As for the gain of the circuit, an input of 1v produces 1v across the 5k resistor, and that is 1/5000 amps which is 200e-6 amps. The usual approximation is Ic=Ie so the current in the collector is taken to be the same.
So the gain is 200e-6/1=200e-6 which is current/voltage which is a transconductance measure but is also referred to as a gain.
If you want to get more picky about the gain then if the Beta is 100 then the base current is 2ua and so then the emitter current is 202ua and the collector current is 200ua so the transconductance is still 200e-6, and given 10mv op amp input offset just to keep it simple.
One test is worth a thousand expert opinions, but one expert specification is worth a thousand tests.
Mathematics is the shortcut to understanding nature.
If i miss something you posted or something you think is important, feel free to PM me.
R

MrAl said:
This kind of circuit can be deceiving.
Click to expand...

spec
Is anything true?
M

Yes but that is only valid once steady state has been reached, and with no parasitics present during the settling time.
Click to expand...

Why look for problems if you don't know if any are presen? All I am saying is that the non-linearity of the base-emitter junction does not affect the transconductance of the circuit, where voltage Vs controls the emitter current in a linear manner.

Ratchit said:
Why look for problems if you don't know if any are presen? All I am saying is that the non-linearity of the base-emitter junction does not affect the transconductance of the circuit, where voltage Vs controls the emitter current in a linear manner.

Not sure what you are talking about here when you ask, "Why look for problems if you dont know if any are present".
The OP already stated the problem that was present, "oscillate like crazy", so we all know if any are present, so you might want to clarify.
One test is worth a thousand expert opinions, but one expert specification is worth a thousand tests.
Mathematics is the shortcut to understanding nature.
If i miss something you posted or something you think is important, feel free to PM me.
R

Yes, the op amp is not at fault, the transistor is. I had the same problem 40 years ago when I built a power supply using a emitter-follower configuration. It oscillated terribly until I stopped it cold with a resistor in the base circuit. Look at this link, especially post #4. https://www.diyaudio.com/forums/power-supplies/174813-unstable-emitter-followers-odd-behavior.html . If you want to get more mathematically involved, then you can peruse four pages from a text book attached below. Look especially at the last sentence of the last page. Apologies for the inverted pages.

Yes interesting reads there thanks for sharing.

With regard to the last paragraph of the last page i quote myself from post #3:


MrAl said:
Hi,
<snip>
The huge nonlinearity of the transistor action can cause problems because of that voltage to current to voltage translation that occurs mostly because of that base emitter diode, so to help the situation a base resistor can be used. That then reduces the non linearity of the transistor and so help to stabilize.
<snip>
Click to expand...

They may be stating it as a frequency domain problem though which is another viewpoint.

If it were not for some of those capacitances this would probably not happen, but then again in a voltage regulator circuit we almost always connect a cap to the output too which does not help matters

But the OP was also talking about an op amp that is already internally stabilized for gains like 5 or greater which means it can oscillate all by itself if connected as a unity gain buffer. I have some op amps like that but i never got around to using them (yet). Most fo the ones i used on the past either had unity gain internal compensation or they did not have any compensation at all and i had to provide my own.

I actually have a regulator circuit i was working on a while back and did not get back to yet which still has an oscillation problem. I need to fix that at some point. It's a really super accurate voltage regulator with adjustment in the millivolts which i needed for something else, so it's nice to have around. With no capacitor on the output (resistor only or battery for charging) it DOES NOT oscillate, but as soon as i connect any of the usual filter caps like 100uf on the output it starts to oscillate, and 10 to 1000uf caps would be typical for some other stuff i have to run so eventually i have to get back to that problem
One test is worth a thousand expert opinions, but one expert specification is worth a thousand tests.
Mathematics is the shortcut to understanding nature.
If i miss something you posted or something you think is important, feel free to PM me.
S

Most Helpful Member
One of the nasty aspects of emitter followers is that, without a hefty constant current emitter drain, they can have an asymmetrical response: low output impedance on positive excisions and a high output impedance with negative excisions. Not only can this cause distortion but it can also make the pulse response odd, and jigger up the frequency response.

There are many ways to stabilize the closed loop circuit so that, as I said earlier, you do not have both the opamp and emitter follower rolling off together when the AOL and ACL close. For power supplies it is often easier to get the opamp down to unity gain as far to the left as possible on the frequency response graph, so the poles caused by the emitter follower's antics are below the unity gain line.

spec said:
One of the nasty aspects of emitter followers is that, without a hefty constant current emitter drain, they can have an asymmetrical response
Click to expand...

If the load can get very highZ. I put a Base-Emitter resistor on the emitter follower. At very light loads the op-amp drives the load through the resistor. When the current causes 0.7V across the resistor then the transistor boosts the current.

Another way to say that; Add a B-E resistor so the op-amp outputs 2 to 10mA into the load with out the transistor helping.