I am a college student doing hobby project, I need to design an IR bream break detector which would work with IR Transmitter and IR Receiver to detect beam break between transmitter and receiver in 1 meter range. Can you please suggest components and circuits for same, preferably requiring 5V. The functionality should not get affected in ambient lighting as well. I will be connecting this to Arduino MC
Last edited: Jun 18, 2022
Sort by date Sort by votes

One normally thinks of use Arduino to measure the V out at receive end of the
detector, analog detector. Of course design complicated by ambient light issues
interfering in detector output. 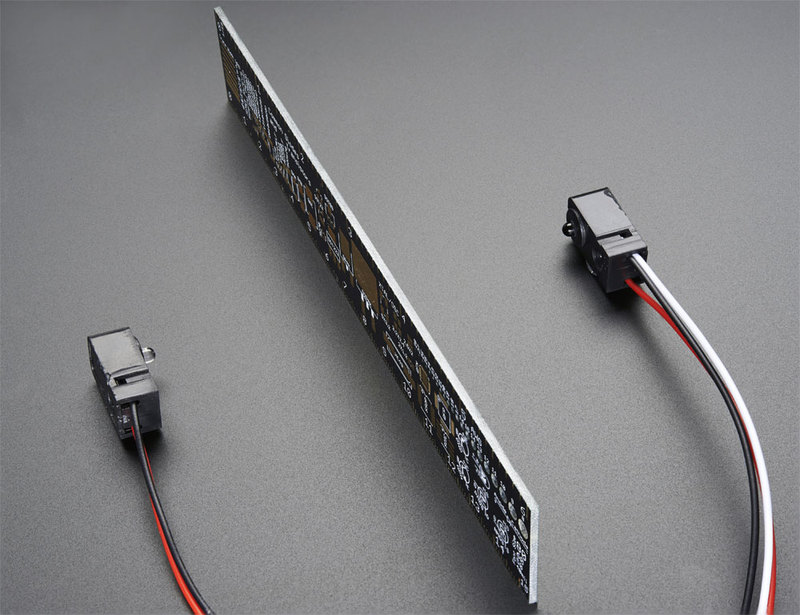 Infrared breakbeams are invisible to the human eye, so they make for great movement detection circuits, with fairly good precision

About I can add is if you can't get the needed 1 meter distance look towards garage door safety sensors. That or consider a LASER system.

Ron
Please do not PM me with forum related questions. Let's keep things in the open forum. Thank you.
Upvote 0 Downvote
P

Most Helpful Member
There are lots of articles available using a 38kHz receiver module with an Arduino. One example.
It sounds like you need to generate the signal with another circuit as the AGC on the reciever modules mean they have to have a pulsing signal (500mS as well as 38kHz).

You could easily get started with just a module, an Arduino and any remote.

Note, television remotes all work at over a meter distance.

These have worked very well for me. The discounted price is ridiculously low which is good. SICK Optics WS15-D1130 / WE15-A1130. Photo-electric sender and receiver pair detects the presence of an object when the beam between the two is interrupted. Useful in automation, alarm systems and door annunciators. When the beam is broken, the receiver produces a current that can be used to...

Or radar solution with Arduino - 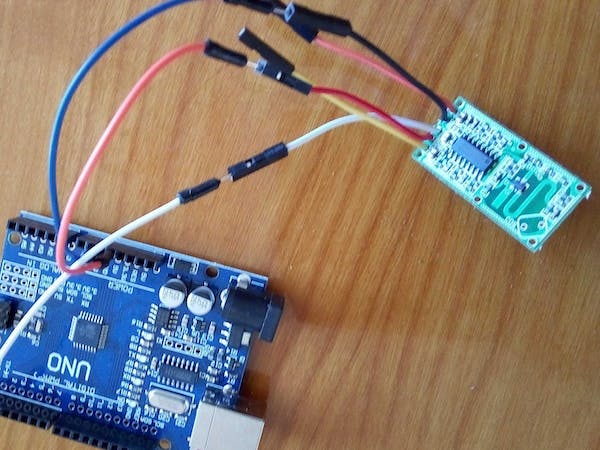 In this project, we are going to interface RCWL-0516 Doppler Radar Sensor with Arduino Nano. By hIOTron. 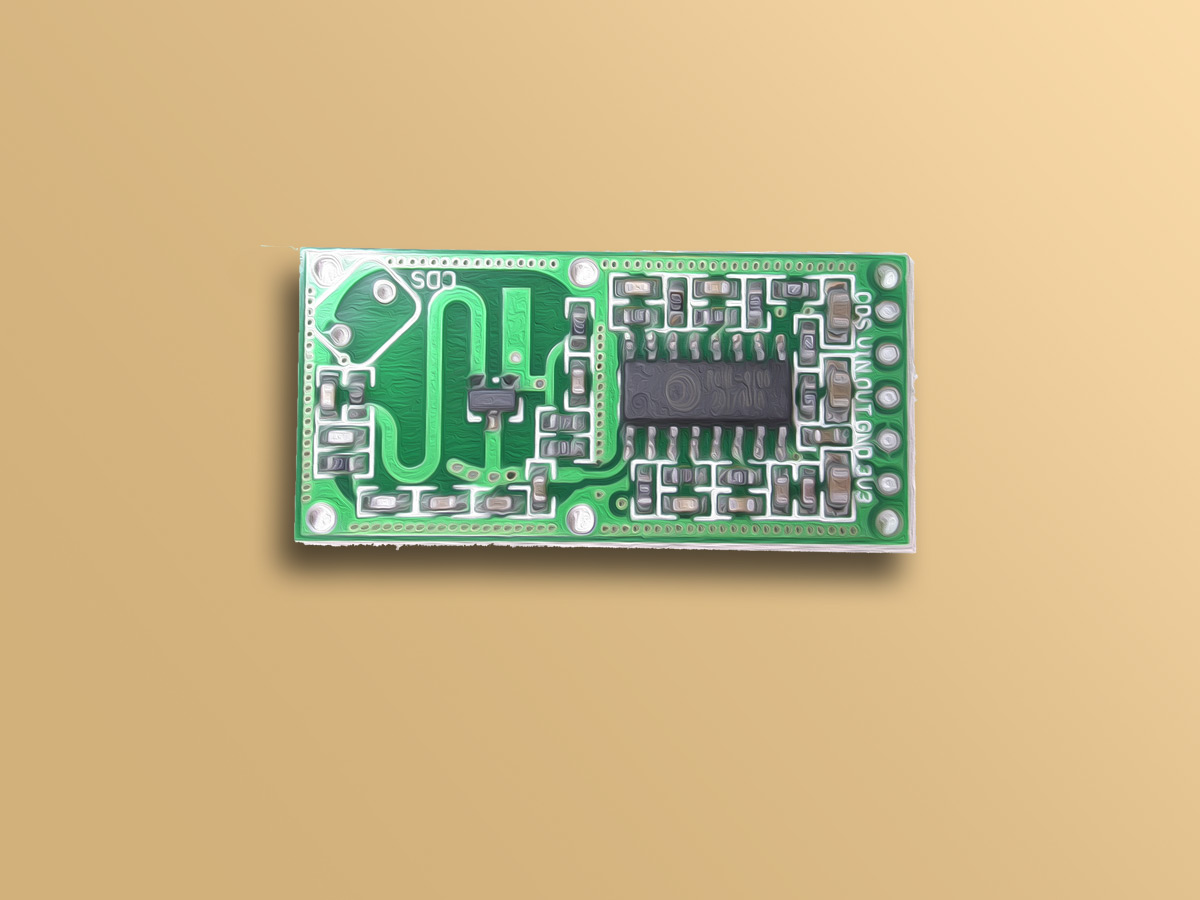 Most Helpful Member
I used the most crude circuit to send commands from one micro to another, distant around 60 cm. 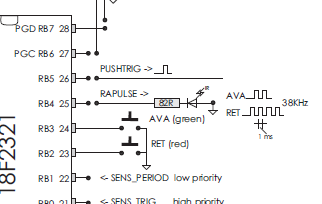 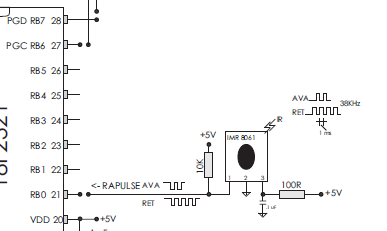 Agustín Tomás
In theory, there is no difference between theory and practice. In practice, however, there is.
Upvote 0 Downvote

I think that if you can align a phototransistor with a cheap laser diode 1 meter away, you would not need more than a cardboard shield to keep the ambient light from swamping out the phototransistor. Should be very easy once you get everything aligned. Run a reasonably high current through the laser diode (check the specifications if available) and put a moderate load on the photo transistor - adjust the photo transistor load for the right sensitivity and away you go!

If ambient is very strong you can modulate (pulse) the laser diode with a couple kHz square wave and then detect the light with a frequency selective amplifier and then detect the couple kHz square wave with a simple diode detector. See U.S. patent 6831628B1 https://patents.google.com/patent/US6831628B1/en?oq=us6831628B1 for an illustration of the square wave amplifier and detector system.
Upvote 0 Downvote

Most Helpful Member
I like Dick's suggestion. I have played with some very inexpensive LASER diodes from Amazon and the mating sensors. Lazer diodes 30 pieces for about $13 USD. You can get fewer for less cost. You can get 5 LASER diode sensors for about $10 USD. While the LASER diodes are rated for 5.0 volts I suggest with 5 volts applied use a 47 Ohm resistor in series with the diodes. I have not tried them in bright daylight but for cost these combinations may be worth a try.

Ron
Please do not PM me with forum related questions. Let's keep things in the open forum. Thank you.
Upvote 0 Downvote
L

I should learn how to use (is it microcomputers?) Had a lot of experience with big mainframe computers, and a lot of industrial control systems & components using mainly CMOS state logic. Tons of analog stuff, from industrial electrical maintenance to military radars, spacecraft hardware and instrumentation, blah blah blah.
I am a hardware type at 99%, the last time I programmed anything beyond my Uniden scanner was when I had a class the on then brand new 16xx microprocessor (1983) Later the TI TMS-9900, but they didn't really interest me all that much.
But as I wrote I should give it a go. I wonder if the local community college has a basic class on the Arduino?
A great example of this is the DIY security system I worked up using 4000 series CMOS state logic, 555's, ULN2003 drivers and the like. Didn't take too long before the project grew out of control. I guess a little Arduino could do it with a very basic board and some pertinent code. Thanks for the reminder.
Upvote 0 Downvote
P

Lax Luthier said:
I wonder if the local community college has a basic class on the Arduino?
Click to expand...

I'd advise to just get an Arduino and give it a go. There are many,many Arduino tutorials online that are probably slower than you'd want but much quicker than most college classes. Personally, I like the Nano.

Mike.
Upvote 0 Downvote
You must log in or register to reply here.

Sep 8, 2021
virtualmark
V
B
I’m trying to resolve a problem with this latch and release break beam circuit