Before I start documenting my build, I feel I should give a bit of background on what a Tesla coil is, in case you don't know.

A Tesla coil is an air-cored resonant transformer capable of achieving extremely high voltages at very high frequencies. A Tesla coil differs from basic iron-cored transformers in that the turns ratio between the primary and secondary has little effect on the secondary voltage. Instead, a Tesla coil relies on having two tuned resonant circuits--one made up of the primary coil and tank capacitor, and the other made up of the secondary coil and topload. When the two circuits are in tune (they both have the same resonant frequency and are oscillating naturally), you get what is referred to as "resonant rise".When a "burst" of current is passed through the primary coil, a current is induced in the secondary. This starts an oscillation in the secondary that "rings" up the coil, and then back down again. If another "burst" of current is passed through the primary at just the right moment, it will add to the waveform on the secondary. One of the most common analogies I have seen is a child's swing: You push the child with a certain force, and he'll go up to a certain height. Then when he swings back and you push him with the same force at just the right time, he'll go even higher. With the Tesla coil, this increase in energy happens tens or hundreds of thousands of times per second, and every time the secondary receives a "burst" of energy from the primary, the voltage at the topload increases. Eventually, the voltage becomes so high that the surrounding air is ionized, and an arc is created.

A traditional Tesla coil uses a high voltage transformer and a spark gap to send current through the tank circuit in order to excite the secondary. The schematic for a basic spark gap Tesla coil (SGTC) looks like this: 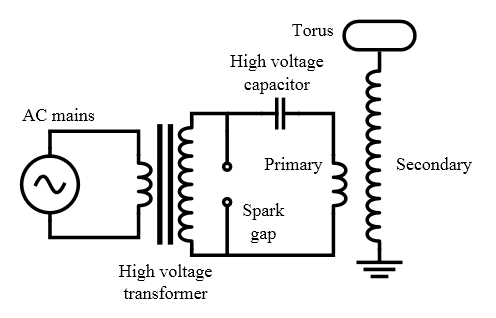 As you can see, when the spark gap conducts the primary coil and capacitor form an LC circuit, which oscillates at its resonant frequency, which then excites the secondary coil.

A dual-resonant solid state Tesla coil (DRSSTC) runs on the same principle, except for one major difference: Instead of using a spark gap to switch current into the tank circuit, we use solid-state devices, namely high-power transistors. Since transistors don't require the high voltage (6+ kilovolts) to conduct that spark gaps do, solid state Tesla coils can run at much lower input voltages. Most DRSSTCs run off of rectified mains (120VAC or 240VAC), which makes them ideal for small, portable, or low-power projects. They don't require hefty transformers or thick insulation that classic Tesla coils do.

As opposed to a basic solid state Tesla coil (SSTC), a DRSSTC has a resonant primary tank circuit that more closely mimics how a classic SGTC operates. The double tuned resonant circuits greatly increase the power throughput from the primary circuit to the secondary, making the DRSSTC much more efficient and impressive than a standard SSTC.

Unfortunately, building a DRSSTC is not quite that easy. You cannot simply replace a spark gap with a transistor. There are a lot of calculations that go into the design, as well as lots of research and extra circuitry. We'll get to this in the next entry though. Now that you (hopefully) have a better idea of what a Tesla coil is, and how a DRSSTC works, it should be easier to follow the rest of the entries.

If you have any questions or comments, feel free to leave a comment or send me a PM!

Until next time,
Matt

Commentskillivolt, July 25, 2014
Good explanation. Helps to get the point across; I like the idea of using lower voltages.DerStrom8, July 25, 2014
Thanks KV. Lower voltages and lightweight supplies are definitely a plus!Yergaderga, June 27, 2015
Well I should have just looked at this before- It describes exactly what I didn't know!