Overview History Discussion
Note that if you are not experienced with high voltage electronics, best not to build this circuit.

This circuit provides power for a main equipment and a slave equipment. It was specifically designed for a 3D printer which operates intermittantly. When the printer operates it draws current from the mains supply. This current is detected and used to turn on the slave device, a vacuum extractor, which automatically starts and removes any debris and fumes from the air.

The circuit does not intrude on the main equipment supply line, but the slave circuit suffers a TRIAC voltage drop. The physical implimation would be a case with two mains sockets- master and slave- with a self lead terminated in a mains plug that fitted a standard domestic wall mains outlet. Of course, the Master-Slave Controller can be used for any similar applications. Note that the circuit didn't get built in the end, so it's only a paper design.

For such a simple function, there are a surprising number of critical areas. The main problem is that you simply can't get enough current from the current transformer (CT), especially with a light Main load, to trigger a decent TRIAC. So you need a power supply and amplifier. I investigated a current source derived directly from the mains, but it always ended up being too complex/ expensive/ power hungry. Wall wart PSUs are pretty small and so cheap but in the end I chose a minature open-frame off-line sitcher. The only down side is that an auxilary power supply still consumes power when the controller is plugged into the mains even with no Main load current, but, being switch-mode, not much. The other difficulty is ensuring the circuit will work with light Main loads.

The result, which isn't tested, is shown in the attached file. TRIACs can be temperamental when feeding reactive loads, so the design uses a 20A Hi Commutation TRIAC which needs a relatively high current of 50mA at around -1.2V, to trigger, a pretty standard spec for such devices. High Com TRIACs only trigger in three quadrants, but have reliable triggering and normally don't need a snubber circuit. For the same reason, 'DC' triggering is used with a 'constant' 60ma trigger current, which is only interrupted for a short period when the mains goes through zero current. Thus, the TRIAC does turn off momentarily. It also turns on again around zero volts as the mains curret increases again. This should be good for EMC.

I didn't bother working out a value for C1 across the Trigger and MT1 of the TRIAC, but some capacitance is probably a good idea to guard against spurious triggering and generally tidy up the trigger waveform. In practice, it probably wouldn't be necessary, especially as the TRIAC has a fairly large trigger capacitance anyway. Q1 should have a high hFE at low currents. The current transformer, without built-in burden, is about £1.40 (CT_20A_10mA), from Ebay. The TRIAC costs about £1 from RS (TRIAC_BTA225-800B) (datasheet: http://docs-europe.electrocomponents.com/webdocs/1325/0900766b8132573f.pdf); as the TRIAC is a critical component, best get it from a reliable source. The PSU is an open-frame, off-line switcher and, once again, is remarkably cheap from Ebay at £1.39 (PSU_mains_to_5V@700mA_board_level). All items are free post and packing too! 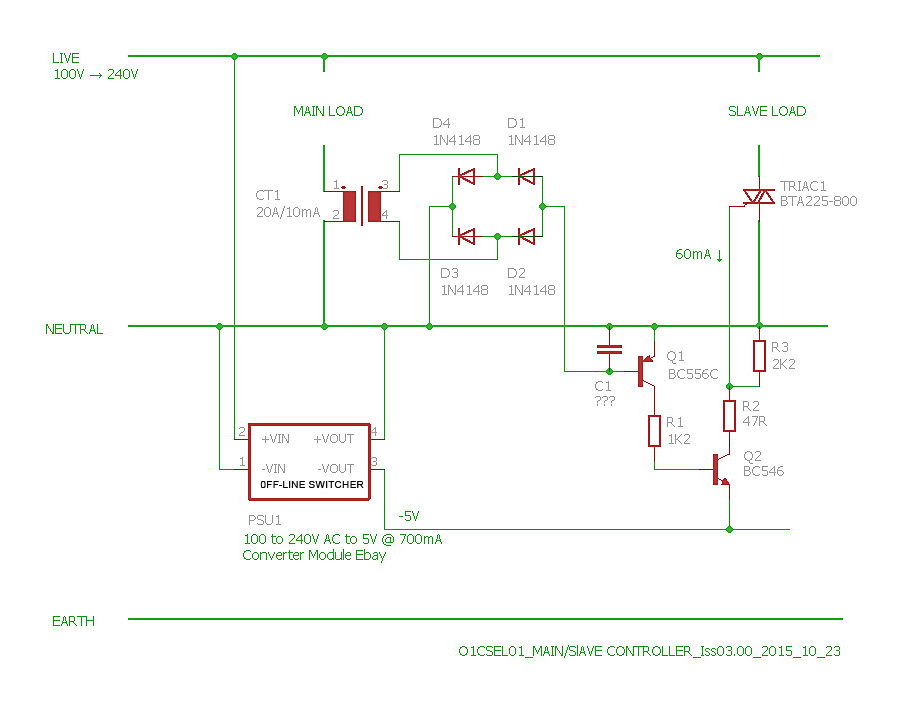