Overview History Discussion
Simple high-side current sources that can be controlled by a ground referenced DC or AC signal are not common. Below is the schematic of such a circuit, a high-side current source that delivers a constant current to a grounded load as controlled by the voltage difference between the differential inputs. The circuit uses a P-MOSFET controlled by an op amp differential circuit. This works because the input resistor (R5), that normally goes to ground in such a circuit, instead goes to the V+ supply. This causes the feedback voltage (fb) to be referenced to V+ instead of ground. Thus fb is taken across Rsense to V+, as required to generate the proper control voltage for the P-MOSFET gate to maintain a constant current. 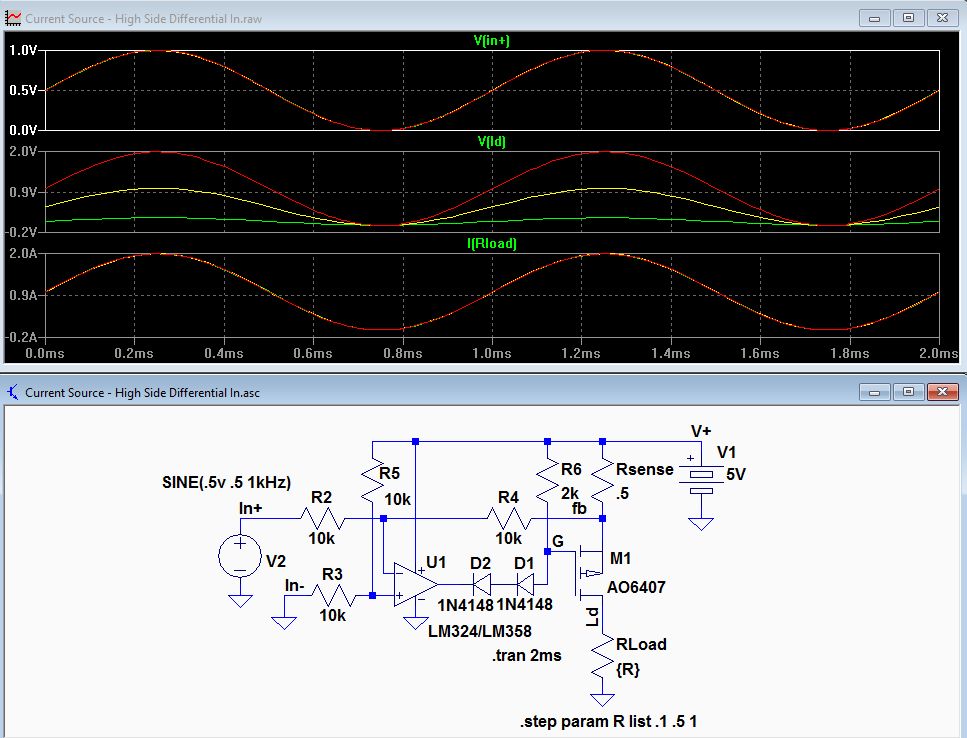 The output current through the load (Rload) equals the differential input voltage divided by the sense resistor value [(V(In+) - V(In-) / Rsense]. If only a single-ended positive input is required then In- can be connected to ground, as shown in the schematic. Alternately In+ could be connected to ground with In- used as the input, which would invert the output phase and allow the use of a negative value input control voltage.

Note that, since R5 is connected to V+, the current generated by this voltage will go out of the In- input resistor R3. Thus a low impedance source that can sink that current is needed if In- is used as an input (which a standard op amp output can readily do).

R6 and diodes D1 and D2 are used to pull up the output at the MOSFET's gate, since the LM324 does not have a rail-rail output.
If the MOSFET has a minimum Vgs(th) ≥1.5V then the circuit should work fine without the diodes.

The LTspice simulation shows the output current is constant for the simulated load variation of 0.1Ω, 0.5Ω, and 1Ω. The circuit frequency response depends primarily upon the response of the op amp (which must be a single-supply type unless dual supplies are used). For the LM324 in the circuit shown, the small signal -3dB point is about 350kHz.